Cows and buffaloes are mainly kept for milk production

It is because dairy animal infertility is big issue in India, reproductively capable animals do not calved regularly

When dairy animal comes in milk?

There are many factors which influence pregnancy and calving

Understanding milking physiology is key to success in dairy farming

Why knowledge of estrous cycle is important?

To know the reproductive patterns of dairy animals

To know proper timing of AI or mating for successful conception

Sexual receptivity means animal is ready for mating and get pregnant

This limited period of receptivity is called estrus and rhythmic cycle of its various phases is called estrous cycle. Its is usually 21day long.

According to the duration there are 4 main stages 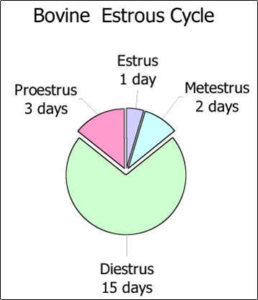 Once the animal reaches puberty and starts reproductive cycling there is a repeated pattern of hormone production. Estrous cycle in cows and buffaloes are of 21 days.

There are 2 phases according to the production of hormones

Follicular phase: This phase is dominated by Estrogen

Luteal phase: This phase is dominated by Progesterone 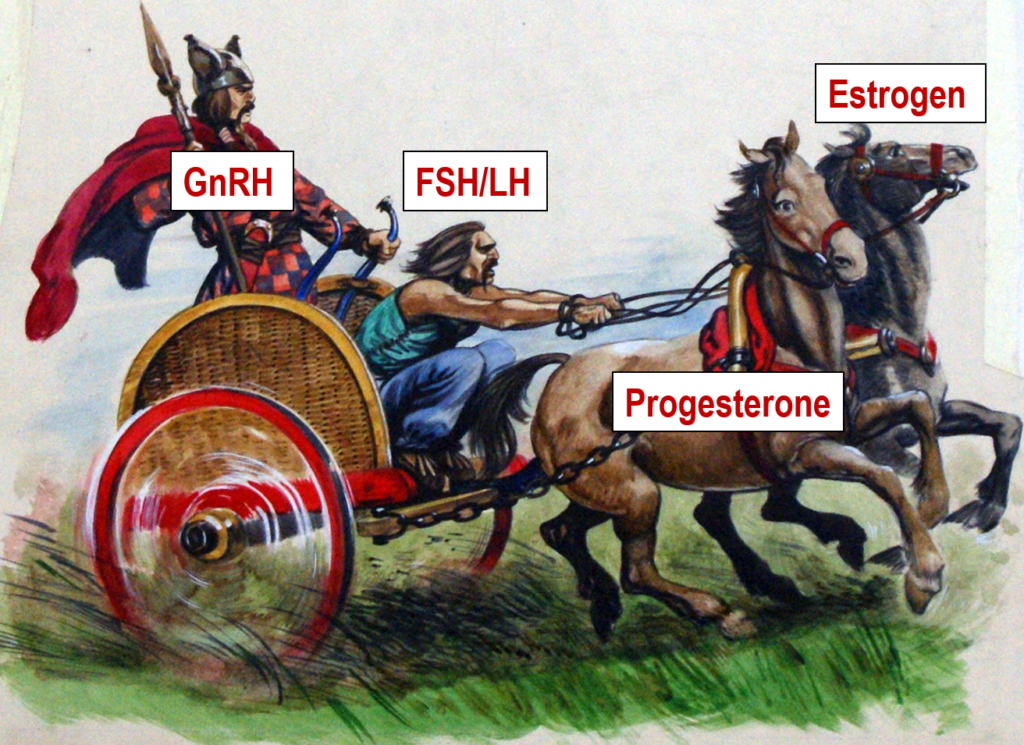 Gonadotropin Releasing Hormone (GnRH): It is a hormone secreted in brain (hypothalamus) which govern overall reproduction pattern through production of other hormones

Luteinizing Hormone (LH): It is secreted from brain (pituitary) helps in ovulation in large doses and required for maintenance of progesterone production from CL

Follicle Stimulating Hormone (FSH): It is secreted from brain (pituitary) helps in development of follicle up to the stage from which egg is released

Estrogen (E2): It is a hormone released from follicular cells under the influence of FSH. This hormone mainly govern sexual receptivity during estrus.

Progesterone (P4): It is a hormone released from luteal cells under the influence of LH. This hormone mainly maintained pregnancy and absence or reduction of it causes abortion. 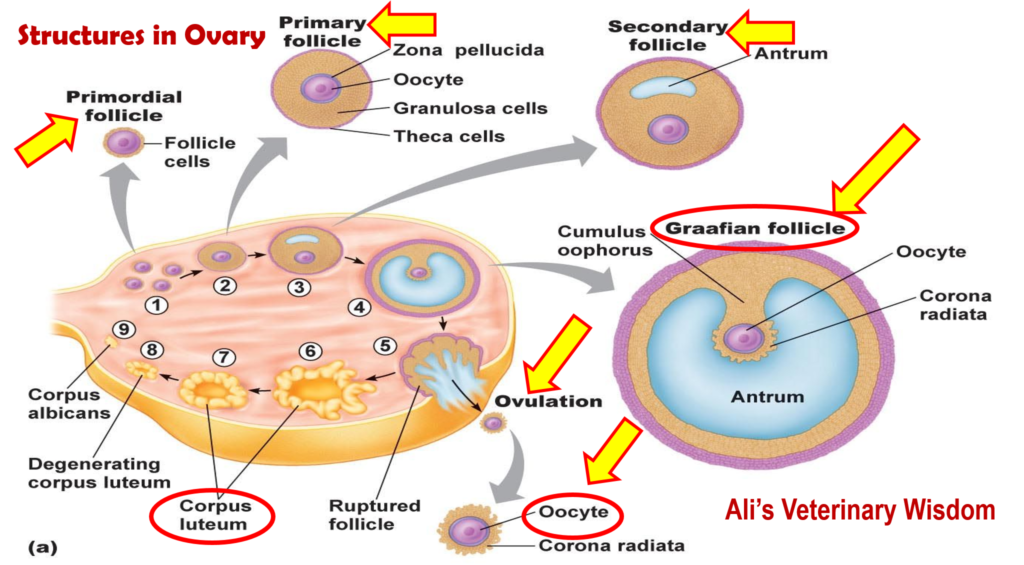 2nd fxn: Production of fertilizable oocyte (egg) which on interaction with sperm generate 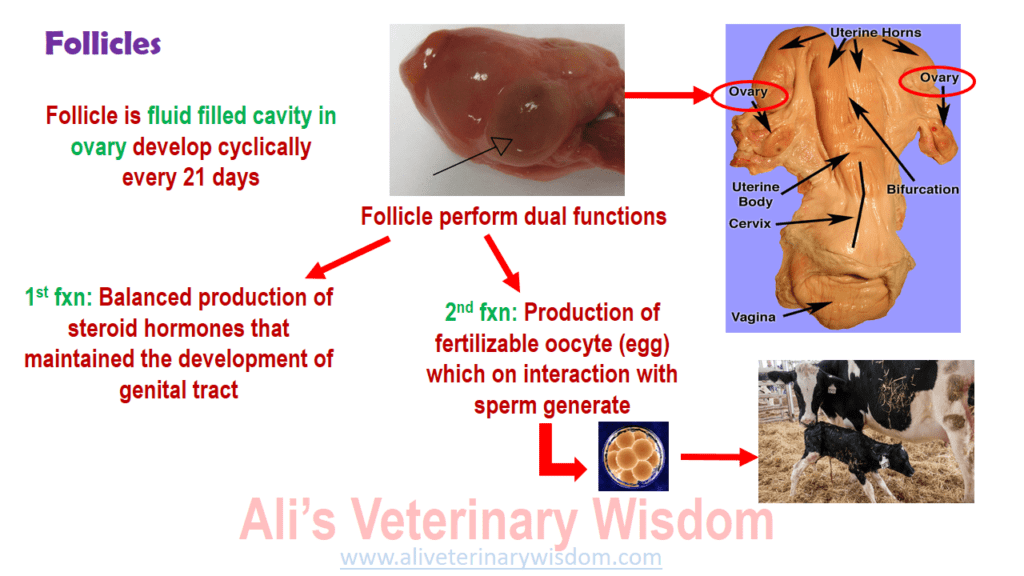 It already has follicle reserve of about 100,000 follicles in its immature ovary

Growing follicles have one of 2 fates

Either undergoes atresia or ovulate an egg for fertilization

Most of the follicles degenerate and destroyed during development. Only few developed into ova (egg) and ovulate 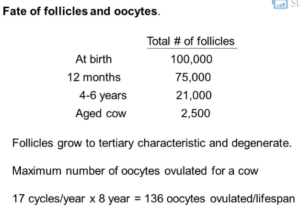 Usually heifers and cows has large pool of primordial follicles which start develops under the influence of sex hormones at puberty.

During this period 2 or 3 waves of follicle development occurs 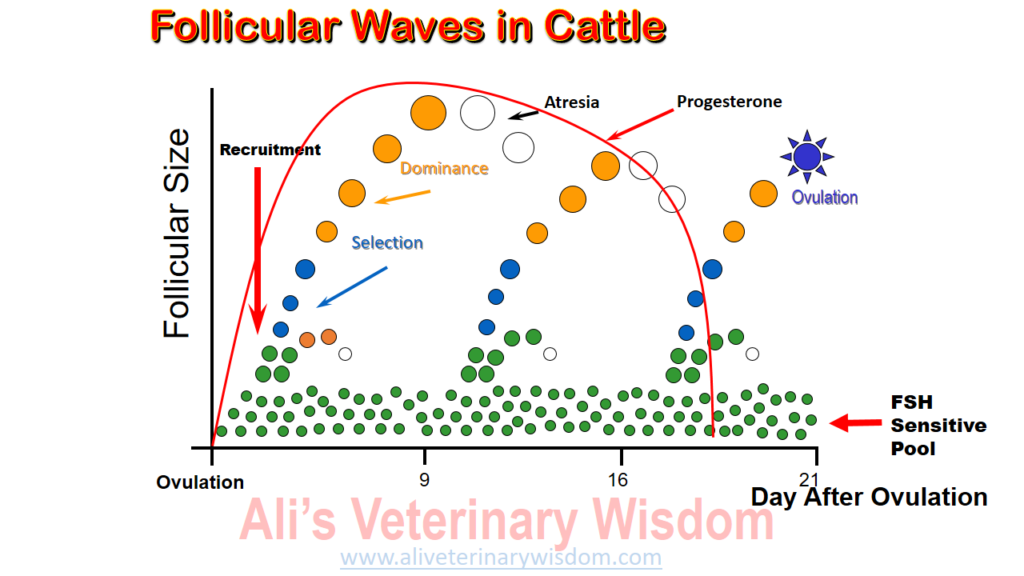 Why only one follicle is developed naturally ?

In IVF & embryo transfer technology in cows super ovulation occurs which means many ovulatory follicles simultaneously develops and ovulate. It occurs because of artificial hormone injection at high doses but in natural conditions only one follicle develops and rapidly developing follicle inhibit development of other growing follicles. 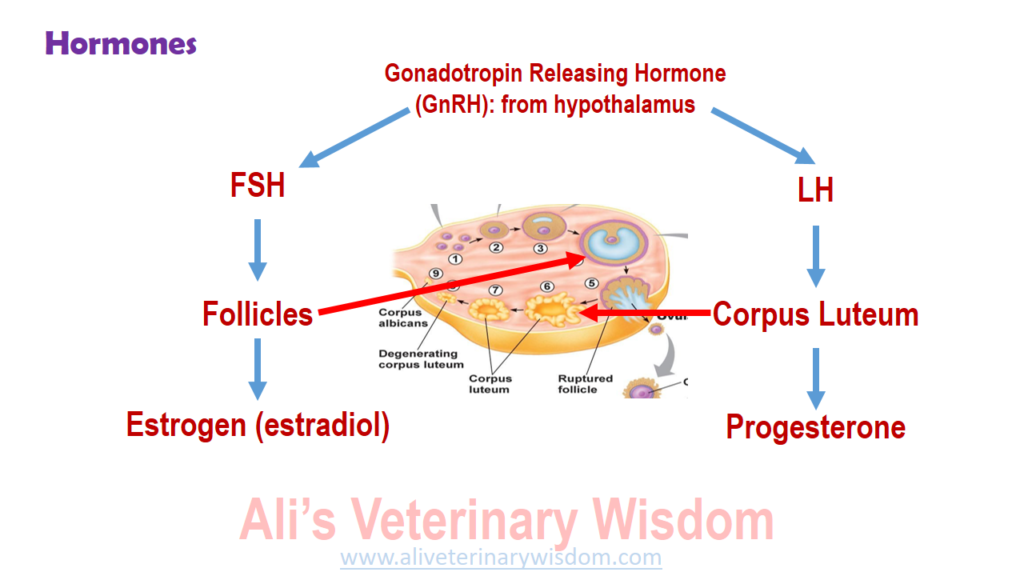 Function of FSH and LH

FSH increases growth and development of graffian follicle (GF), this follicle contains ovum inside it

Just before release of ovum when GF ripen completely, FSH start decreasing and there is surge of LH from pituitary

LH causes loosening of cells around ovum and causes its release

Best time of mating or AI 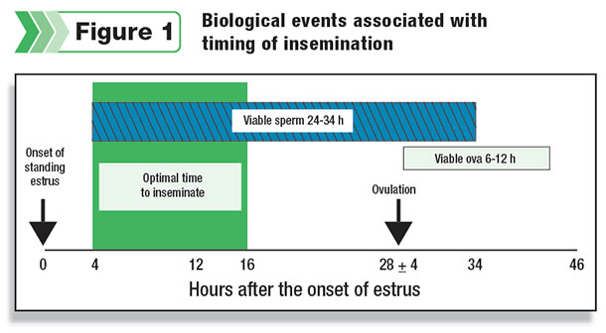 When follicle do not ovulate and cells do not luteinize they continuously secretes estrogen, this is called FOLLICULAR CYST

In addition to insufficient LH, the causes of follicular cysts are unclear, their development has been linked to genetics, nutritional factors of under- or over- feeding, high milk production (increased steroid metabolism), and stress.

Basic causes are same as that of follicular cyst

In this condition LH hormone release is somewhat greater than follicular cyst condition which causes luteinization of cells but lesser enough that do not cause ovulation.

LUTEAL CYST is extension of FOLLICULAR CYST such that the non-ovulatory follicle is partially luteinized spontaneously or in response to hormonal therapy.

Many commercial products are available to treat follicular cyst

Hormonal treatment of a follicular cyst with GnRH analogue like BUSERELIN will generally cause the cyst to luteinize and subsequent treatment with prostaglandin F2α analogue like CLOPROSTENOL or DINOPROST will resolve the luteinizing cyst by triggering luteolysis. 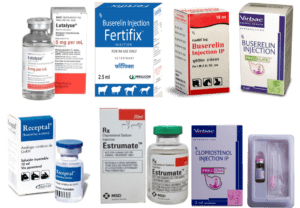 In summary, estrogen is used by the follicle(s) and

(1) to stimulate the growth and development of the granulosa

(2) to signal the hypothalamus and anterior pituitary as to the readiness of the follicle(s) for ovulation.

Main function of CL is the production of progesterone

If animal gets pregnant it maintained and release progesterone for the maintenance of pregnancy. 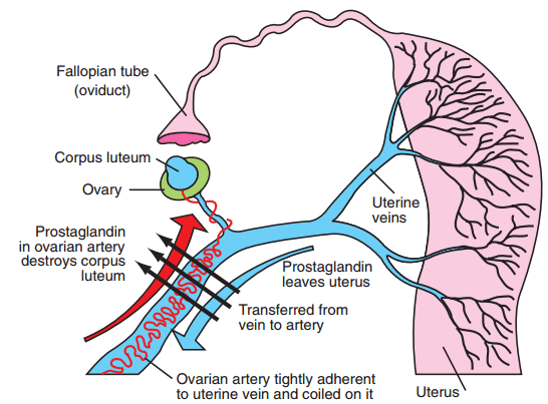 In buffaloes CL may not produce sufficient progesterone due to deficient LH and its receptors, which causes early abortion and repeat estrous cycle.. That is why external progesterone injections may prevent abortions in buffaloes

Again in buffaloes mainly and also in exotic cows when sufficient PGF2α is not produced then CL wont get regress and continually produces progesterone which do not allow animal to come in heat this condition is called as persistent CL. In this case lutalyse injection may be helpful.