The feed is material that, after ingestion by animals, is capable of being digested, absorbed and utilised. Grass, for example, is described as feed, but not all its components are digestible.

Those components capable of being utilised by animals are described as nutrients. So, this is a clear cut difference in feed & nutrients, feed which is ingested and nutrients which are digested and absorbed.

The diet of farm animals in particular consists of plants and plant products, consequently a study of animal nutrition must necessarily begin with the plant itself.

The speciality of plants: Plants are able to synthesise complex materials from simple substances such as carbon dioxide from the air, and water and inorganic elements from the soil.

Photosynthesis is the process through which plants trapped sun’s energy and this energy is stored as chemical energy within the plant itself and it is this energy that is used by the animal for the maintenance of life.

To study feed material scientifically, the feed has to characterise chemically. This chemical analysis is technically called Proximate Analysis. This system was developed by Weende.

The proximate analysis defines the composition of feed which is the first step in determining the quality of feed & its utility to the animals.

What is the proximate analysis? This system of analysis divides the food into six fractions: moisture, ash, crude protein, ether extract, crude fibre and nitrogen-free extractives.

The moisture content is determined as the loss in weight that results from drying a known weight of food to constant weight at 100°C.

Note: heating method for the determination of the dry matter is not suitable for silage. Why? Because along with moisture VFAs of silage also evaporate which has main nutrition value in silage and contribute significant weight to silage. For silage, moisture is determined directly by distilling the water from the sample under toluene. The distillate is measured and corrected for the presence of fermentation acids and alcohols. 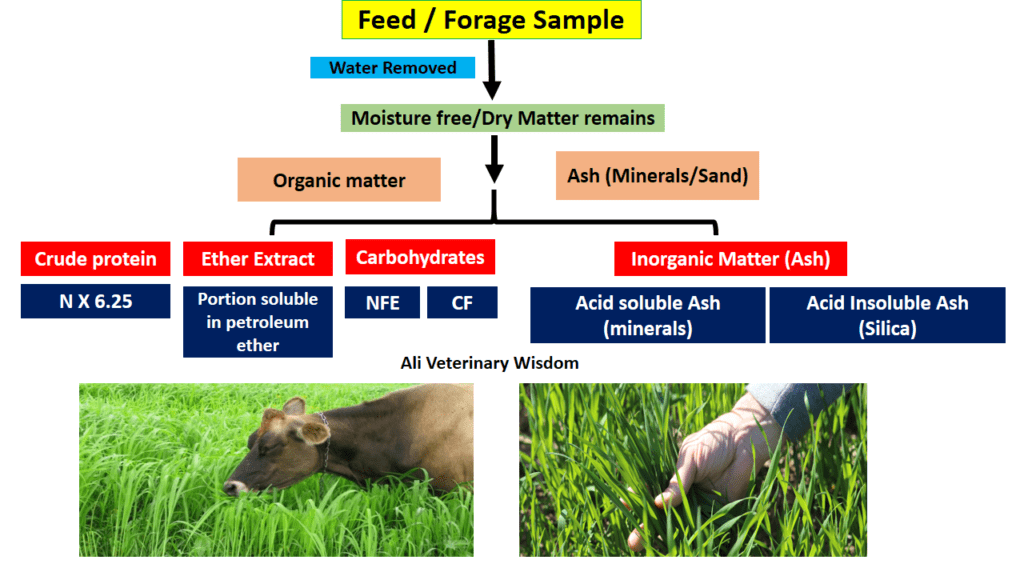 The ash content is determined by the ignition of a known weight of the feed at 550°C until all carbon has been removed. Ash is treated with excess concentrated HCl and extracted, the part which becomes dissolved in acid is called Acid Soluble Ash (ASA) and it contains minerals. The part which remains insoluble in acid is called Acid Insoluble Ash (AIA), this is called silica. This part of the feed is an inorganic constituent which is technically called as ash and mainly contains silica and some minerals like sulphur and phosphorus, sodium, chloride, potassium etc. Ash content does not have much nutrition significance, as animals do not have a requirement for ash but require the individual mineral elements.

The crude protein (CP) is calculated from the nitrogen content of the feed, determined by the Kjeldahl method. It is assumed that the nitrogen is derived from protein-containing 16 per cent nitrogen, and by multiplying the nitrogen figure by 6.25 (i.e. 100/16) an approximate protein value is obtained. This is not true protein but the only expression of total nitrogen, true protein may always less than crude protein.

Note: sometimes to increase the CP value of feed, it can be adulterated with urea.

The ether extract (EE) fraction is determined by subjecting the feed to a continuous extraction with petroleum ether for a defined period. The residue, after evaporation of the solvent, is the ether extract. There are 2 methods for its determination, first is method A sample is not digested prior extraction and second is method B, in which sample is digested with acid prior to extraction.

The carbohydrate of the food is contained in two fractions, the crude fibre (CF) and the nitrogen-free extractives (NFE).

Crude fibre (CF) is determined by subjecting the residual feed from ether extraction to successive treatments with boiling acid and alkali of defined concentration; the organic residue is the crude fibre.

Important point: The crude fibre fraction contains cellulose, lignin and hemicelluloses, all these vary depending upon the species and stage of growth of the plant material

When the sum of the amounts of moisture, ash, crude protein, ether extract and crude fibre (expressed in g/kg) is subtracted from 1000, the difference is designated the nitrogen-free extractives. NFE is basically Includes starch, sugars, fructans, pectins, organic acids and pigment.

Ketosis in cows – prevention and treatment