A potential problem with immature, high moisture maize is that drying conditions must be vigorous & harsher to reduce moisture to the level of 15%. Excessive heating causes caramelization of maize which affects its quality and also reduces the availability of lysine due to happening of Millard reaction.

Quality assessment of maize before buying
What is quality? “those attributes of the food which makesit agreeable to those who consume it”. These attributes includes colour, flavour, texture, nutritional value and the absence of harmful substances such as microorganisms, insects, pest and their metabolic products, chemical residue and noxious seeds.
Grain quality have 2 aspects i.e. general aspect (related to nutrional value) and safety aspect (related to hazard posed to consumers) 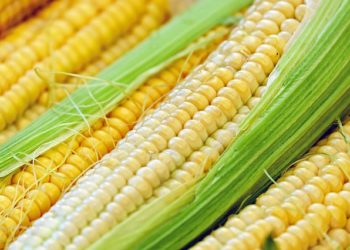 Eg. When grading white maize, maize which has yellow or pink colouration that is less than 50% of the surface is still considered white maize. Care should be taken not to grade grain of other colours as discoloured grain.

White maize may not contain more than 2% total volume of different coloured maize.

2. Maize type – Based on the surface of grain maize is divided into 2 types

When grading maize, it has to be described by its colour and nature e.g. white flint maize or, yellow dent maize, etc.

3. Diseased grains – rotten and not looking good. We can observe it from outside easily. Mouldy grains have various colours depending upon mould or yeasts. Eg. Cob rot damage, blight damage etc

5. Insect damaged – those that have been partially eaten by weevils, grain borers or other crawling pests. The grain kernel may have the germ partly or wholly destroyed.

6. Discoloured grains –  that are materially discoloured (at least 25% of the surface) by excessive heat, including that caused by excessive respiration (heat damage) and dried damaged kernels.

9. Broken grains – intact maize and pieces of maize which have passed through a metal sieve with round holes whose diameter is 4.5 mm. any broken grain retains on sieve are not to be considered as broken.

10. Other grains – some other cereal grains or pulses that are edible may be identified which is not at all required.

11. Foreign matter – it is all organic and inorganic material other than maize, broken kernels and other grains. Matter of plant origin, dead worms, insects etc.

13. Stained kernels – These are maize kernels whose natural colour has been altered by external factors.

Determination of moisture content: Usually, it is done by moisture meter but in the field many farmers do not have this facility, in such cases following method could be employed.

Mycotoxins are a group of chemicals produced by certain mould fungi. This broad category includes Aflatoxins and Fumonisin. These fungi, Aspergillus flavus and Aspergillus parasiticus can be recognized by their yellow-green or grey-green, or pink colours.

The presence of Aflatoxin is tested using thin layer chromatography, high-performance liquid chromatography or absorbance meters (e.g. Elisa readers), rapid test kits and Blacklight. Aflatoxin may be found in good looking grain. Mouldy maize does not necessarily have high Aflatoxin levels. It could contain other mycotoxins though.