Understanding the size of Poultry Industry: Poultry sector in India is valued at about Rs. 80,000 crore (2015-16) broadly divided into two sub-sectors – one with a highly organized commercial sector with about 80% of the total market share (say, Rs. 64,000 crore) and the other being unorganized with about 20% of the total market share of Rs. 16,000 Crore. It is estimated that with a poultry population of 729 million [30% layers at around 215 million and 40% broilers at around 480 million] small and medium farmers are mostly engaged in contract farming system under larger integrators and there are around 30 million farmers engaged in backyard poultry as per 19th Livestock Census.

Poultry meat: The poultry meat production in the country has increased to nearly 3.46 million tons during the year 2016-17 from 3.26 million tonnes during the year 2015-16 at around 6% growth rate. The 2017 broiler production is projected at 4.5 million tons which is approximately seven percent more from last year possibly because of rising domestic demand for poultry meat. The growth in the broiler segment is expected to remain strong due to consumer preference for poultry, increasing income levels, and changing food habits. The live market sales of broiler meat still constitute more than 90-95 percent of total volume of sales; the processed chicken meat segment comprises only about 5% of total production.

What is vertical integration: Vertical integration means all steps in poultry production operated by single organization. They don’t purchase anything from outside except raw material and perform all production and processing operation on their own. Because they reduce their cost of production drastically their market survivability increases many times and they seldom undergoes losses. They actually drive the market and open daily broiler and egg’s rates according to their margins and demand forces from markets. But this production system is highly money intensive and strictly knowledge based. Capital infusion has to be done in technology, bulk purchase of raw material on minimal rates during flush season like maize, soy DOC etc. 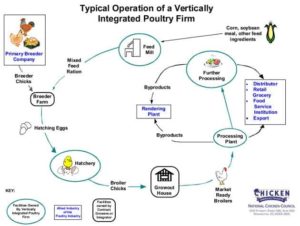 Where small farmers get ditched: Small farmers lacking both the prerequisites of modern poultry industry. They lack knowledge as well as capital. They depend on big companies for all materials required for farming. They purchase chicks from breeder companies and hatcheries who earn up to 400 to 500% of profits from farmers. A chick whose actual cost is Rs. 10 to 12 will be sold to the farmer at Rs.40 on an average.

Secondly, they purchase feed from feed companies at the average rate of Rs.27 per Kg and companies usually earns Rs.5 to 7 per Kg. In this case, if small farmer wants to start 1000 bird’s farm than he have to buy chicks for Rs. 40,000/- and total feed around 3,500Kg which costs around Rs.94,500/- and lump sum Rs.5000/- medicine he will use. Now, if we calculate, we can see that before starting a farm he already made a loss of Rs. 45,500/- as compare to integrator who produce both chicks as well as feed on his own. You can observe here that this money is all goes into the pockets of big companies and they never seen any losses.

Farmers takes a bet for next 42 days, he would be at risk further, if chick quality was not good enough than early chick mortality would be inevitable. Farmer seldom thinks that first week’s chick mortality is mostly mistake of breeder and hatchery. Many times feed quality is also compromised due to mycotoxin contamination and imbalance calorie protein ratio. Certain other reasons also accumulates with this and FCR gets poorer and poorer. Now at this time if all goes well farmer gets 2.25Kg chicken with 5% mortality at the FCR of 1.7.

If farmer is fortunate enough and get market rate of Rs.70/- per Kg he will earn approximately Rs.10,000/- but this rates are not usually seen and annual average rates are around Rs.62/- per kg which means he made a loss of approximately Rs.8,000/-. Whereas integrator in such conditions earns Rs.42,000/-

Poultry farming is now all become game of capital and knowledge

These figures are tentative and average (near to actual values). Although many other advantages for integrators and disadvantages for independent farmers do not get counted due to inconvenience of calculations.

For example in 17th point if market slums into Rs.50 per Kg independent farmer may went into the losses of Rs.20,512/- approx. while integrator still earns nearly Rs.7 per kg. In reality integrator earns more than that because he deals in bulk and most importantly he has control over market rates, he open market rates as per his whims and control supply as per demand, to ensure his maximum profits.

Not integrators but open capitalistic market’s economic principles drives out small farmers out of business in the absence of any regulatory authority. So here we can see that it’s a growing sector but only for capitalists not farmers as poultry farming is not remain a part time farming enterprise but full time industrial production.

Game of knowledge and capital: One can see here that integrator still earns handsome returns even when market rates are opened at Rs.50/- where small farmers get into the losses. In one another scenario if farmer making his own feed and not getting it from feed company than he will never go into the losses and even earn some profits to the tune of Rs. 15000/- and Rs.40000/- when bird sell @ Rs.60 per Kg. but feed manufacturing needs knowledge of balance feed and advisory on broiler nutrition.

Most of the small farmers do not know how to manufacture good balanced feed, it need advance knowledge of nutrition sciences and software based feed formulations. Small farmers do not have such nutrition knowledge facilities. That is why I said earlier “poultry farming is now all become game of knowledge and capital”. Investments in feed manufacturing and hatchery setups could bring some fortunes to independent farmers. Obviously, small farmers couldn’t invest and manage feed manufacturing and hatchery on their own, but if farmers gather themselves in some production societies or cooperative structures they can afford these cost cutting setups.

Structure of Integration and Production Facilities.

The contractor is also relieved of these biggest threats from a disease outbreak and market slum as his millions of birds are reared under different locations on different times that too in small numbers by several small farmers.

The way forward – future of broiler industry and small farmers

For mediocre independent farmers, there are some tips

Why Maize is Become So Expensive?